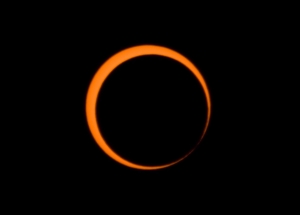 The eclipse of the Sun takes place when The Sun, The Moon and The Earth all appear in a straight line. The observer on The Earth watch The Moon moving in front of The Sun while covering it. The dimensions of The Moon and The Sun appear to be same from Earth due to their size and distance proportions being identical. The elliptical orbits of The Earth around the Sun and The Moon around the Earth causes in small apparent changes in their sizes and hence the nature of eclipses are different. A smaller Moon and bigger Sun will cause “Annular Eclipse” whereas a Small Sun and bigger Moon will cause “Total Eclipse”. 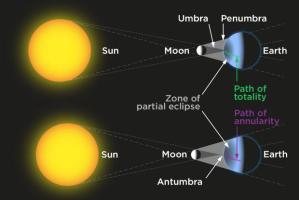 On December 26th The Earth will be near perihelion making The Sun’s apparent size a few arc sec larger. The Moon on this day will be farther from The Earth and hence appear smaller. This causes the Annular Eclipse of The Sun. The distance of The Moon on this day will be approximately 3,84,000 KM. The Annular eclipse is also refer to as the “Ring of Fire” due to the solar disk appear as ring around The Moon. The initial and final phases of the eclipse are similar to the total eclipse however instead of observing the corona, we observe the disk of Sun around which enable us to study the lunar limb profile. 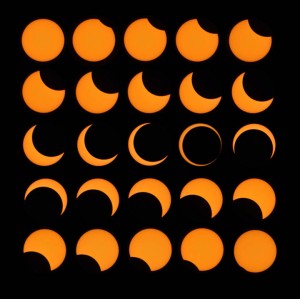 To view the eclipse safely, you need to use certain safe equipments to observe. The use of solar filters is widely accepted method for safe viewing. Projecting image of The Sun is another method to observe. Astrophile India will be doing a live webcast of the eclipse for all the users and followers. The same can be shared among your groups/institutions/social media as per your choice.

Here are Central contact timings for ASE2019  for some of the cities in India. If your city is not mentioned in it, find the nearest one around you and the timings will be off by a few milliseconds for the location on your east or west. If the location is north or south of your observation site, the timings will be similar except the percentage of obscuration will vary by a few basis points. If you are not in the “Path of Annularity” and do not want to travel to the locations to witness Annular eclipse, then I would suggest you read Contact times for ASE2019 which covers most of the important cities across all states and Union territories in India. If you do not find any city with in 100 KM radius of your location in this, do let us know and we will add the list and share timings for your location.

While you get all excited and willing to go out and look at it, please understand that looking at Sun is extremely harmful and dangerous to your eyes. There are certain safe methods to observe. If you do not know, search it over the internet or write to us for more details. If you do not have any equipment and want to join us for more details, we will announce the same in the month of July after 20th.